I got the idea from ADVrider forums where I found a couple of different approaches to the process. There is no real sensible purpose for this project, but out of curiosity I want to see if the decatted exhaust will run noticeably cooler. I'm also interested in how the decatting affects the sound. (I like my exhausts as quiet as possible). The starting point is a -09 SMC exhaust which looks visually identical to the current  -14 version with the exception of it not having the single mounting hole and the missing "crash guard". If all goes well, I will have a slightly lighter and somewhat cooler quiet OEM pipe.

At this point I'm not at all certain if I can mount the -09 pipe directly to the bike simply by using one of the two mounting holes. I.e. I don't know if the holes will match.

***Disclaimer, I recommend you don't attempt this at home. Neither should you install a decatted exhaust on your bike since it may be illegal and/or damage your bike.


Step one, hacksawing the exhaust in two [Sat Nov. 15th]

(Step one should really be to check if the holes match and the pipe can be mounted using the existing mounting holes etc., but I'll worry about that later)

With the help of a power drill, a long iron rod and a hammer the cat was first drilled and then pounded clean off. Seemed hopeless at first, but the key was to drill it full of big holes first and then chip away what was left.

The weight (the now separated end cap not included) was reduced from 4,315 kilos to 4,137... This means removing the cat resulted in weight savings of 178 grams or 6,3 ounces. Clearly saving weight is a very poor excuse for decatting.

Next step: find a welder... (this can take a while)

Step three, welding it back together 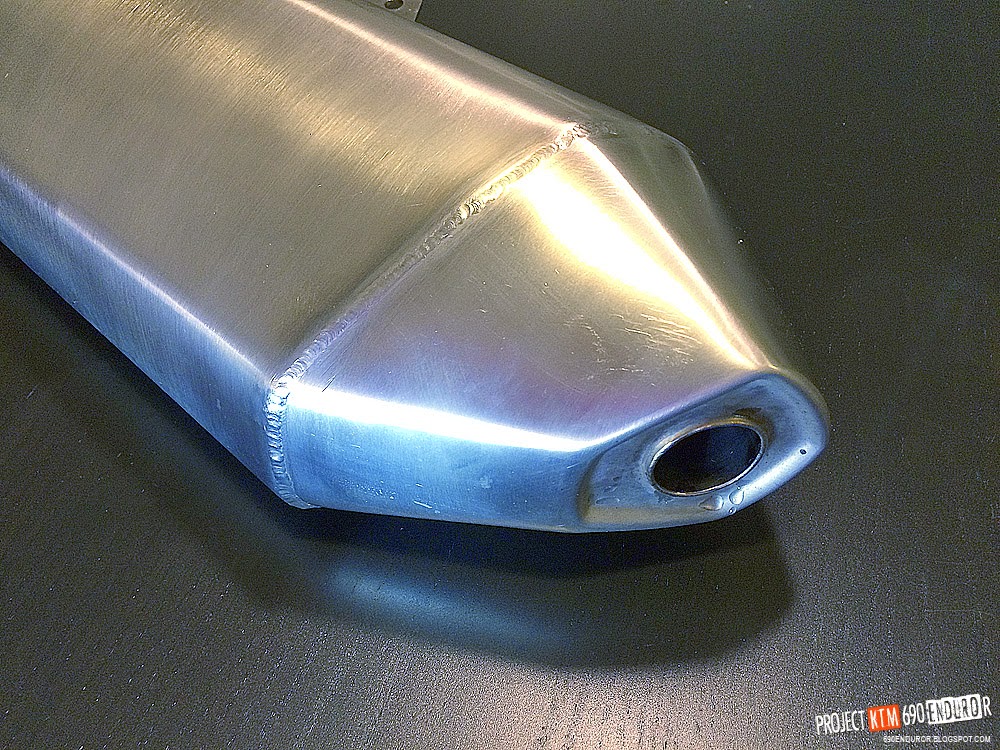 I found a welder through a friend and he did a rather good job in my opinion. Cost me a bottle of gin so the price was very reasonable too.

Next step, mounting it on the bike

For now, I'm assuming the existing mounting holes will not match. I will probably have a chance to test this assumption during the weekend. I'll keep you posted.

UPDATE [30. Nov]
Eyeballing the pipes side by side the holes could match, but the problem was the width of the -14 adapter. Apparently the earlier bikes with two hole mounts had an adapter that was narrower. 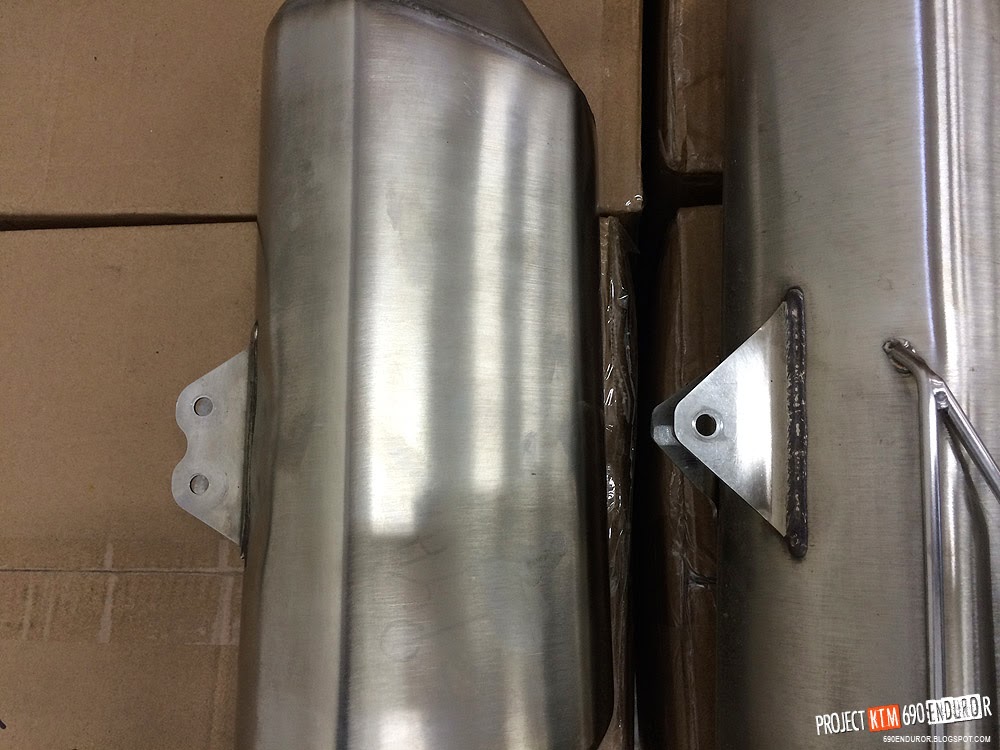 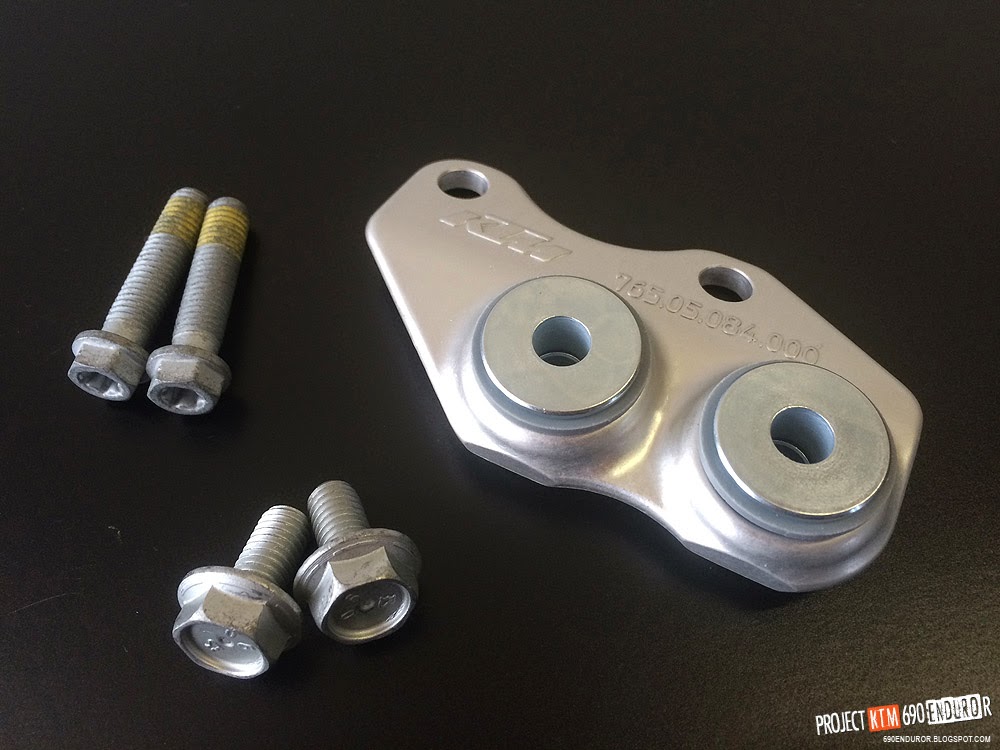 Today was finally time to mount and test the modified pipe. I was armed with a temperature "gun" and an iphone decibel measuring app. After running the bike with the original pipe for a while it became clear that the temparture measuring would not work under these conditions. The outside temp was 2 Celsius degrees (35 F) and the pipe would only warm up up to 14 degrees after 6 minutes. I wasn't going to stand out in the cold and wait for both the pipes to heat up properly.

The noise levels were pretty similar which was good. My unscientific measuring method, showed an increase of 2 to 3 decibels at 5000 rpm. At lower rpms the difference was maybe 1 decibel. Again very unreliable data and very unscientific method, but watching the videos will probably give you a better idea.

The mounting itself did not go according to plan. For some reason the mounting holes on the pipe would not match up. The pipe was seated properly, maybe even a millimeter or two deeper than the OEM -14 pipe, but there was still a half a bolts width to go. There was no hope of getting the bolts in place. No big deal for now, but I will have to figure out a solution later.

I just can't understand what is causing the mismatch though.

Email ThisBlogThis!Share to TwitterShare to FacebookShare to Pinterest
Labels: service